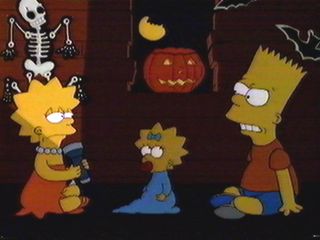 When I was growing up and for many years after, one of my favorite Halloween traditions was watching the Simpsons Treehouse of Horror specials with my sister. After coming home from Trick or Treating, we'd settle in with our VHS taped Simpsons Halloween Specials and watch them from earliest to latest. The tradition has changed a bit over the years (too old for Trick or Treating now *sob*), but we still watch the episodes together, usually throughout the month of October and leading up to Halloween. There are so many classic, nostalgic, hilarious bits from the Treehouse of Horror episodes that we still quote randomly to this day.

Treehouse of Horror 1
This episode starts off with Bart and Lisa and Maggie sitting in the treehouse telling spooky tales...

Bad Dream House--This one reminded me a lot of one of my favorite movies, Poltergeist.  Bart tells this scary little story about The Simpsons moving into an evil, haunted house...

The Raven--Based on Edgar Alan Poe's poem, this one is told by Lisa and stars Homer.  This one has to be one of my all time favorite tales...

Hungry Are The Damned--This was based on the Twilight Zone episode "To Serve Man".  Bart tells this tale about aliens abducting The Simpsons who supposedly are planning to eat our favorite family... 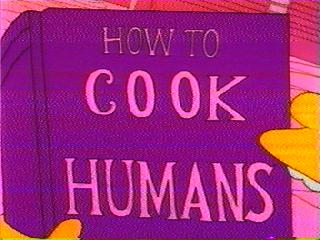 Treehouse of Horror 2
This episode starts out with Homer, Lisa, Bart, and Maggie returning from trick or treating and start gobbling up their candy.  Marge warns them, however, that if they eat too much they'll have nightmares...

Lisa's Nightmare--Lisa dreams of a monkey paw that grants the owner wishes.

Bart's Nightmare--Based on the Twilight Zone episode "It's A Good Life"(starring Bill Mumy), this story stars Bart as the boy with the powers.  Things really turn into a nightmare when Bart turns Homer into a Jack-In-The-Box.

Homer's Nightmare--This is a Frankenstein parody where Mr. Burns builds a robot and needs a brain for it.  Let's just say that Homer picked a bad time to fall asleep.

Treehouse of Horror 3
This episode starts with the Simpsons having a Halloween party, and they begin to tell spooky stories in the dark...

Clown Without Pity--This story is loosely based on The Twilight Zone episode "Living Doll".  Homer buys Bart a Krusty Doll for his birthday, but it turns out to be evil.

Dial Z For Zombie--This is one of my favorite stories.  Lisa wants to bring back her cat Snowball, and Bart offers to help.  Too bad he cast the wrong spell, and raises the living dead...

King Homer--This is a King Kong parody, starring Homer as the big ape.

Treehouse of Horrors 4
Bart walks through a "night gallery" of horrifying paintings, and introduces stories based on a few of the paintings...

The Devil and Homer Simpson--Homer sells his soul to the devil for a donut.

Nightmare At 5 and Half Feet--This story is based on the Twilight Zone episode "Nightmare At 20,000 Feet", only this story takes place on a school bus.

Bart Simpson's Dracula--The Simpsons go to Mr. Burns' house, and Lisa soon finds out that their host is a vampire. 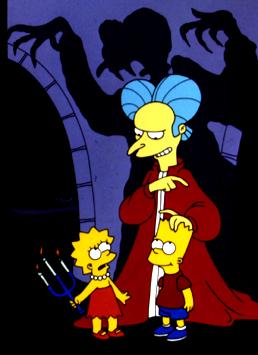 Treehouse of Horror 5
The Shinning--Based on Stephen King's The Shining (shh! do you wanna get sued?), Homer goes crazy when he doesn't get any beer or tv.

Time and Punishment--While fixing the toaster, Homer accidentally turns it into a time machine and is sent back in time.

Nightmare Cafeteria--Bart and Lisa become suspicious when so many of their classmates keep disappearing. They soon find out that the teachers have been having a nice feast out of the student body. 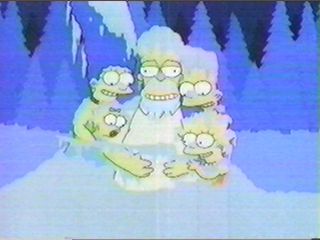 Treehouse of Horror 6
Attack of the 50-Foot Eyesores--Terror strikes when statues of advertising mascots come to life and destroy the town.

Nightmare on Evergreen Terrace--Based on Nightmare on Elm Street, Willy attacks the school children in their dreams.

Homer3--Homer goes into a 3D world to avoid Patty and Selma.

The Genesis Tub--Lisa, by accident, forms a miniature town out of one of her baby teeth. 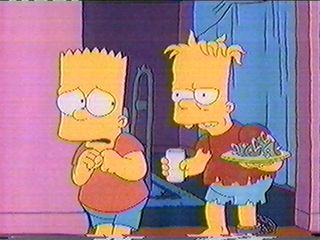 Treehouse of Horror 8
The Homega Man--After a nuclear blast, Homer is the last man on Earth...or is he?

Easy-Bake Coven--Back in colonial times, Marge is accused of being a witch...this one also includes how Halloween began. 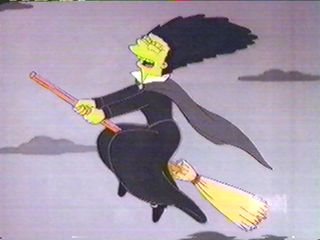 The Terror of Tiny Toon--Bart and Lisa get sucked into the tv in one of their favorite shows...Itchy and Scratchy.

Starship Poopers--Maggie's real father turns out to be an alien leading to a spot on the Jerry Springer Show. 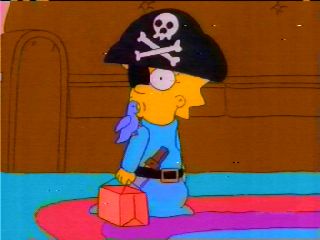 Treehouse of Horror 10
I Know What You Diddily-Iddly-Did--The family runs over and believes that they've killed Ned Flanders.

Desperately Xeeking Xena--Lisa and Bart are blasted with radiation, get superpowers and become "Stretch Dude and Clobber Girl".

Life's a Glitch, Then You Die--After Homer forgets to set the nuclear plant computer for Y2K, all the computers in the world glitch, causing disaster.

Treehouse of Horror 11
G-G-Ghost D-D-Dad--Homer dies and has to do a good deed before getting into heaven.

Scary Tales Can Come True--A strange Hansel and Gretel remake, with Bart and Lisa in the title rolls.

Night of the Dolphin--Dolphins seek revenge on humans.

Treehouse of Horror 12
Hex and the City--The family is cursed by a gypsy due to Homer's usual ineptness.

House of Whacks--The family home obtains an upgrade, the Ultrahouse 3000, a computer that will do everything for them.

Wiz Kids--Bart and Lisa are attending wizard school in a Harry Potter take-off.

Treehouse of Horror 13
Send in the Clones--Homer finds that his new hammock is capable of making clones.

The Right to Keep and Scare Harms--Lisa finds the grave of William Bonney who was killed by gun violence. In his memory, she starts a gun control crusade. 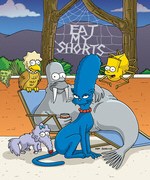 "Stop the World, I Want to Goof Off" - Bart and Milhouse find a watch that can stop time. 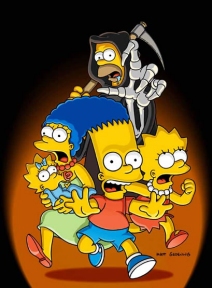 "The Ned Zone": A spoof of The Dead Zone, after Ned receives a head injury he sees the future when he touches someone.

"Four Beheadings and a Funeral": A Sherlock Holmes takeoff.

"In the Belly of the Boss": Professor Frink invents a giant capsule that will supply vitamins for a person's lifetime, but after he shrinks it, he discovers that Maggie is stuck inside. 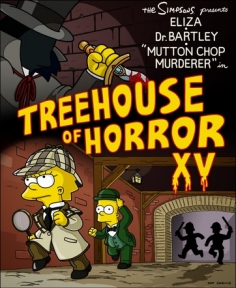 "Survival of the Fattest": a parody of "The Most Dangerous Game" where the men of Springfield are hunted as prey.

"I've Grown A Costume on Your Face": During a costume contest, a real witch casts a spell, turning the entire town into real versions of their costumes. 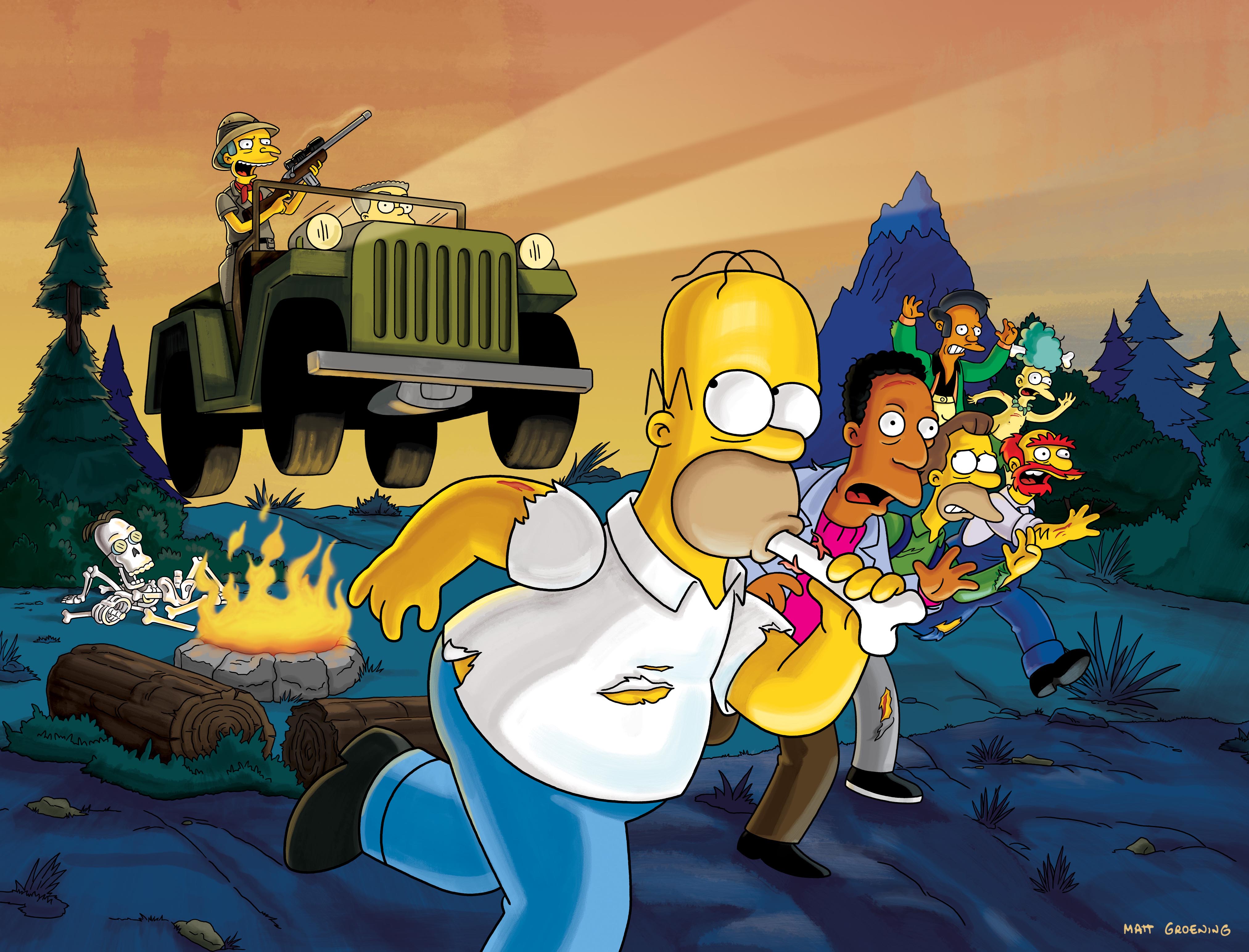 "Married to the Blob": a parody of the Blob, Homer begins consuming everything in sight after a meteor lands in his backyard.

"You Gotta Know When To Golem": Bart steals a Golem statue to do his bidding.

"The Day The Earth Looked Stupid": A take off of The War of the Worlds, where Kang and Kodos invade Springfield in the year 1938.

"Mr. & Mrs. Simpson": A parody of Mr. & Mrs. Smith, Homer and Marge are assassins set on killing each other. 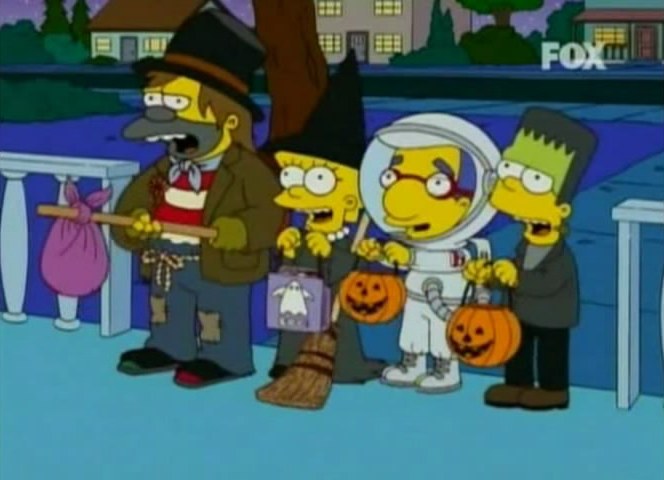 "How To Get Ahead In Dead-vertising": Homer is hired by advertising agents to kill celebrities in order to use them freely in their commercials. 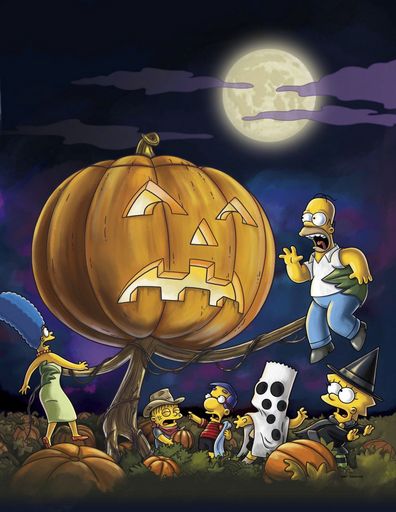 "Dial M for Murder or Press # to Return to Main Menu": a take-off of Strangers On A Train, Bart and Lisa agree to kill each other's teachers.

"Don't Have a Cow, Mankind": Springfield is overrun by zombies after the townspeople eat tainted Krusty burgers

"There's No Business Like Moe Business": In the style of a Broadway musical, Homer gets impaled by microbrew pipes in Moe's basement, and Moe takes advantage by using his blood to make a new beer. 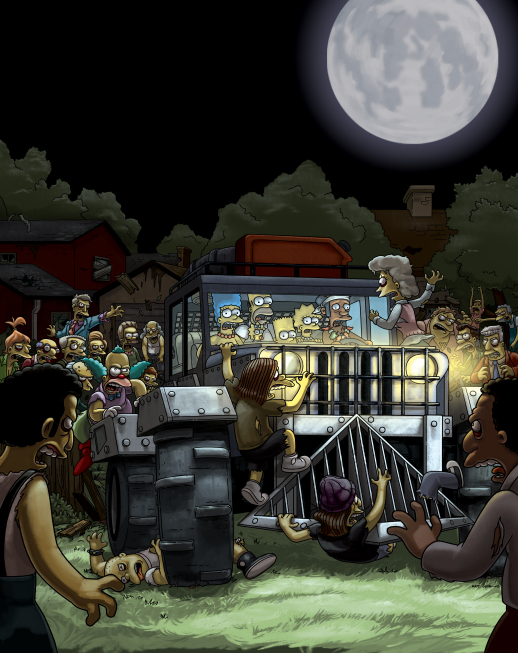 "War and Pieces": a Jumanji parody, where Bart and Milhouse play a supernatural board game that turns the town into a real life board game.

"Master and Cadaver": while out sailing, Homer and Marge rescue a suspicious cast away, who they're convinced is trying to kill them.

"Tweenlight": a Twilight parody, where Lisa falls in love with a new student, who happens to be a vampire. 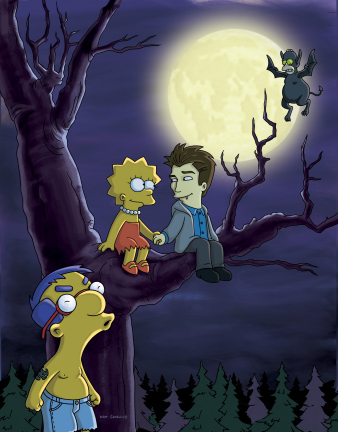 "The Diving Bell and Butterball": Homer gets bitten by a spider that paralyzes him

"Dial D for Diddly": Ned becomes a serial killer in this "Dexter" parody

"In the Na'Vi": an "Avatar" parody, taking place on the planet Rigel 7, where Kang and Kodos are from. 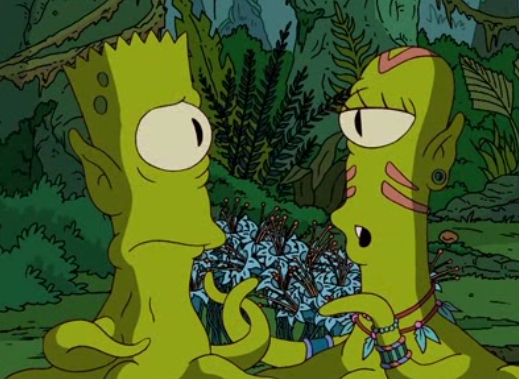 "The Greatest Story Ever Holed": The activation of the Springfield Particle Accelerator, causes a black hole to form, which Lisa must keep hidden.

"Bart & Homer's Excellent Adventure": When Bart travels back in time to buy a comic book, he tells Marge not to marry Homer, and ends up changing the future. 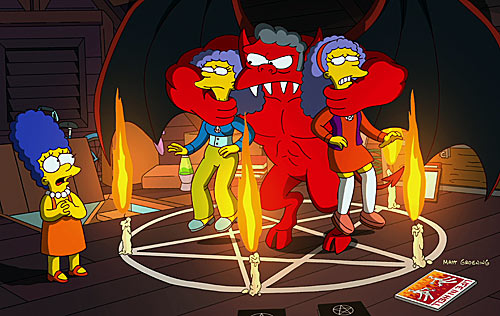 "Oh The Places You'll D'oh": A Dr. Seuss inspired Halloween for the Simpsons.

"Dead and Shoulders": When Bart is accidentally decapitated, his head gets attached to Lisa's body to save his life.

"Freaks, No Geeks": a parody of "Freaks", where  Marge plans to marry sideshow freak, Moe. 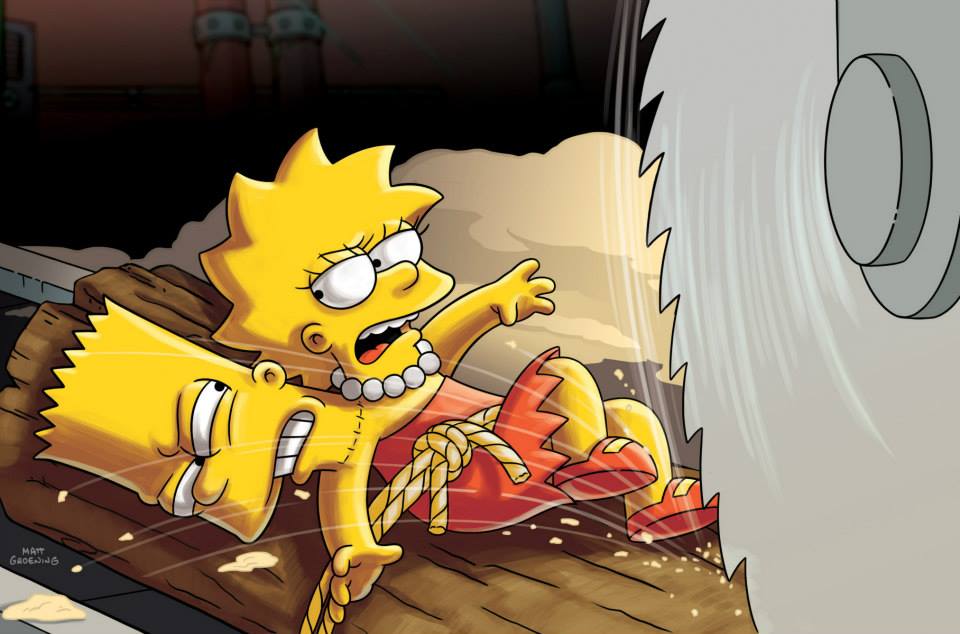 7) Treehouse of Horror Theme (kind of poor quality, but this was to conserve space)

Here are a few of my favorite quotes...

2. Lisa: It chose to destroy itself rather than live with us. One can't help but feel a little rejected.

3. Alien: On this cable system, we receive over one million channels from the furthest reaches of the galaxy.
Bart: Do you get HBO?
Alien: No, that would cost extra.

5. Alien 1: It seems the earthlings won.
Alien 2: Did they? That board with a nail in it may have defeated us.But the humans won't stop there. They'll make bigger boards and bigger nails, and soon, they will make a board with a nail so big, it will destroy them all!

8. Lisa: Bart, you cast the wrong spell!  Zombies!
Bart: Lis, please, they prefer to be called "the living impaired".

Yum, doesn't this donut look tasty...don't you just wanna take a bite out of it?  Go ahead! Go on!  Take a nice big bite!  You know you want to!  come on...click the donut!

Well, that's it for this page.  Have a safe and Happy Halloween!